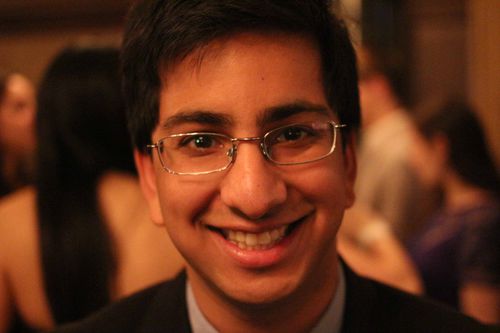 Chinmay is a junior Mechanical Engineering major at Yale University. Chinmay grew up in the heart of the Silicon Valley, and has been surrounded by technology from a very young age. He is passionate about race cars and robots, and spends a lot of his time outside class working on both. He is a mentor for two FIRST Robotics teams, one near his college, and one back home in San Jose. He has also built the website BecauseRobots.org to encourage high school students to consider and appreciate all the things robotics and technology do for them every day.

He began working in the Robotics Lab at Yale his freshmen year with shape memory alloys and tier applications in grasping and manipulation. He is passionate about being able to simplify the technology needed to manufacture effective prosthetic and robotic hands to enable people with a disability, or an amputee, the ability to regain functionality of tier limb. Chinmay also works for the Admissions Office at Yale recruiting prospective STEM students and engaging with them about Yale's resources

Outside of engineering, Chinmay is an active member of the student government as Class President, and previously as the Class Secretary and Class Representative. He is also the lead photographer for the Yale Yearbook. His favorite pass times include playing intramural sports, building model airplanes, and listening to EDM while dreaming of DJ-ing.