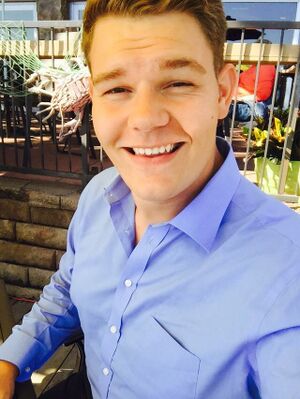 Benjamin Scott Olson was born and raised in Fargo, North Dakota and received a high school diploma from Davies High School. Benjamin was always involved in his pre-college years, including active participation and competition in forensics, DECA, choral singing, theatre, FBLA, and worked both fast food and restaurant service.  In January of 2014, Benjamin was admitted into the University of North Dakota. He is currently pursuing a Bachelors of Science in Public Administration, a Bachelors of Arts in Public Relations Communications, a minor in Political Science and Certificate in Entrepreneurship Studies.

In addition to his chosen degrees, Benjamin has also been very involved since beginning his studies at UND. In September of 2014, Benjamin began competing with the UND Speech and Debate Team, which focuses on involvement that seeks to empower through argument and advocacy. Benjamin is now the Vice President of Public Relations and a nationally qualified competitor. In January of 2015, Benjamin was hired by the City of Grand Forks as in intern in the Mayor’s Office. He worked for 6 months at the City, where he completed an assessment of the entrepreneur environment in Grand Forks. He was awarded the opportunity to work with many business and non-profit constituents within Grand Forks, as well as a student entrepreneur research team at the University. The final report was published on the City of Grand Forks website and is serving as a platform for entrepreneurial growth. The spring semester was also spent coaching middle schools in speech and debate.

After a busy first college year, Benjamin was approached with an opportunity to begin 3d printing and design company called 3C Innovators. Operating out of Grand Forks, North Dakota,  Benjamin and his business partner work directly with clients to turn their ideas into developed prototypes. The main emphasis is working with students at both the high school and collegiate levels by integrating entrepreneur and design education to provide experiential learning.  Owning a business wasn’t something that he expected to be doing, but is absolutely thrilled to be a part of the business community. Benjamin is also the treasurer for the Student Advisory Council  in the College of Business and Public Administration, coordinator for The Edge co-working space and is a Stanford University Innovation Fellow. Benjamin hopes to pursue a MBA/JD at UND and is interested in politics, carpentry and engine mechanics. Benjamin’s biggest passion is working with people, developing connections and fostering positive relationships.