Amun Mehta is a University Innovation Fellow and an undergraduate student studying Operations Management and Social Psychology and Personality at the Ohio State University (OSU). Amun is originally from Troy, MI, where he lived until 2017 when he moved to Columbus, Ohio. After his passion for design thinking surfaced, he was reached out to for the application to join UIF. 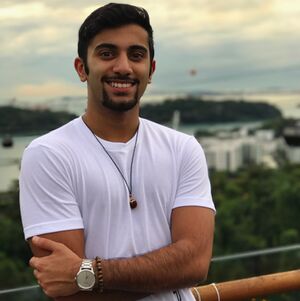 At the Ohio State University, Amun is involved with the Fisher College of Business as a Business Scholar. He is the Director of Spirit and Traditions in the Ohio Union Activities Board where he along with his committee plan various campus events such as Homecoming and Welcome Week. He is also heavily involved with an early arrival program known as R-LEAD dedicated to expanding the reach of leadership among incoming freshmen.

From a young age, Amun followed a path of a young innovator. Searching for whatever household materials he could find, he would construct many random objects to add to his childhood adventures. He is extremely passionate about the use of art and innovation to bring various demographics into a collective headspace, where society's problems can be acknowledged and solved. On top of that, Amun loves to spend his time outdoors where he can be most in touch with nature as that is where he finds comfort. Between hiking, camping, and running, his summers are spent taking in the world to revitalize him for the next academic year.