From University Innovation Fellows
(Redirected from Elina Davé)
Jump to navigation Jump to search
Originally from New Jersey, Elina Davé is currently a sophomore at Union College in Schenectady, New York. She is pursuing 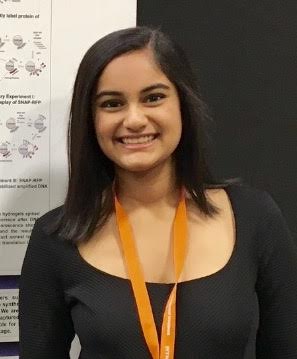 interdepartmental (ID) major in Science, Medicine, and Technology in Culture (SMT in Culture) and Economics. Elina’s experiences have greatly impacted the person she is today. A number of her professional experiences have guided her into selecting this particular field of study.

Prior to studying at Union, Elina had the opportunity of conducting research as a high school student in several prestigious laboratories. In the summer of 2013, she was able to do research at Rutgers University in Biomedical Engineering and Pharmaceutical Drug Delivery labs. The following summer, Elina was again given the opportunity to conduct research at Harvard University in the School of Engineering and Applied Sciences (SEAS). Her positive and rewarding experiences at both of these universities initially lead her into being interested in the Bioengineering field. When she joined Union in 2015, Elina continued to conduct independent research, she joined the Union College chapter of Engineering Ambassadors Network, and became active with other engineering-related organizations. During the summer of 2016, Elina was selected for the Research Experience for Undergraduates (REU) program at Harvard University, where she continued to conduct bioengineering research. She has also published a book chapter and a paper, and has presented her research at national conferences. However, after learning more about the way science can impact our culture and world, Elina realized her interests were broader than engineering. She started becoming more involved with areas such as global health, economics, entrepreneurship, and innovation.

Outside of her school work, Elina is involved with many clubs and organizations. For example, she is active in the South Asian community on campus, she volunteers at Union’s Kenney Community Center by tutoring students in math and english from the local community, and is greatly involved with the Union College Minerva program. Elina also enjoys tennis, running, music, reading books, and learning new things. Most important to Elina, however, are her family and friends. Without their unconditional love and support, she would not have had the confidence and determination to pursue her dreams and ambitions. Elina strives towards a career in healthcare where she can also follow her passions in innovation and entrepreneurship.