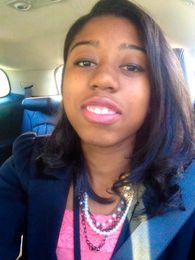 at North Carolina Agricultural and Technical State University (NC A&T). Angelica’s four major pillars of inspiration include technology, entrepreneurship, education, and global citizenship. Her passion for academic research has afforded her the opportunity to work on Ecological Forecasting at the National Aeronautics and Space Administration (NASA), National Science Foundation initiatives, Active Authentication research for a global financial institution, as well as  Collaborative Learning research within the computer science department at NC A&T.

Angelica is known for being excited by challenges, open to new ideas and cultures, and being naturally drawn to problem solving. She is a big believer in volunteerism, and, in addition to being a campus Honors Program mentor, she is a member of the National Society of Black Engineers, and a computer science S.T.A.R.S. mentor. Her hobbies include learning new languages (programming and human), traveling, web development and graphic design.

Angelica’s favorite quote: "If I had asked people what they wanted, they would have said faster horses.” –Henry Ford