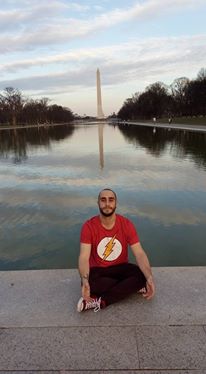 Mathias Rosas forms part of the second generation of Mechatronics Engineering in UTEC, at the Southwest ITR, in the city of Fray Bentos, Río Negro, Uruguay. Also, in 2016 he was selected by the US embassy in Uruguay for SUSI 2017, and became a member of the State Alumni net. Prior to study in UTEC, he was studying Electronics Engineering at UDELAR, in Montevideo, but left his studies and home in the capital to pursue his long dream of studying Mechatronics Engineering, a career that his previous university didn’t offer. Since arriving at UTEC in 2016, he has been a leader to his peers, given his constant participation in defending student’s rights and been part in every proposal to improve the education in the mentioned university and encouragement of his fellow students to an active participation and active learning in college. Given this, his peers chose him to be their delegate and represent them in front of the UTEC council. In October he participated at the Innovation Week held in the Southwest ITR, organized by Jamk University and UPM from Finland, UTEC, CLAEH and Air Forces from Uruguay. This event led him to meet Florencia Gonsebatte and Florencia Jano from CLAEH, with who he will be joining UIF together. In his personal life, he was born on October 30th of 1992, in Montevideo, Uruguay. At the age of 9, his family was forced to leave the country and moved to Tenerife Island, in the Canary Island, Spain (although, geographically, it’s in front of the Africa continent). In his condition of legal immigrant he found a very xenophobic society, which open his eyes of the world and made him fight for his rights in society; the travel itself marked him in the way that one of his objectives in life is to make a better world so families doesn’t have to exile themselves from their own countries for better opportunities; and his coming to age in a very conflicted family (that parted ways with his father when he was 14 years old), made him grow an adult very early in life, in charge, and in help, of his family with two little sisters of 3 and 5 while studying at high school and working at his mother cafeteria. Two years laters, with his family already well organized and prospering, his family and he joined the Red Cross, helping the illegal immigrants who came by “patera” (a very precarious boat where 20 people fitted in 5x2 meters) arrive to the island, giving them survival kits and getting them medical help. In 2009, his family returned to their mother country, Uruguay. There he passed through the final years of high school and started the University, in 2011, all the while working in different jobs. In his third year of college, he moved to an apartment in the capital alone, keeping his work and study. Unfortunately, he left his studies the next year, because he wasn’t feeling motivated for his branch of study and there was no approach to innovation nor entrepreneurship so far in the university. So, for a year, he only dedicated to work, in this case in an emergency call center, arranging all kind of services just to save people's life around the world. There he learned (“and trained”) his leadership skills, given that he worked the midnight shift, where he worked with no supervisors nor other people in charge over him. Finally, at the beginning of 2016, he learned about UTEC and Mechatronics Engineering, the branch of engineering that he always dreamed of studying. So he moved to Fray Bentos and resumed his studies again. Apart from studies and worked, he is an enthusiast of sports, practicing all kind of workout and martial art. Loves reading in every format, from hard raw science books through science fiction tales, poetry and comics. He is not a good dancer, so he prefers just listening to all kind of music who is able to touch his soul. His heroes are Isaac Asimov, a man who shared greatest questions and views through his tales and books, Nikola Tesla, who had a unique mind, Michael Faraday, who from nothing raised himself and became one of the greatest scientist of all time and Carl Sagan, who opened his eyes to the universe and all the marvels that it contains. Right now, he is working on a few projects in his university and other institutions in the Uruguay. One of them is a program that will create a bridge between the newcomers, the grade students, and the work field, making a unique and diverse group, which each of them will be approaching new and dare perspectives from an educational point of view to facing diffidence and perseverance in solving complicated tasks.