Resource:How to generate awareness and excitement by raising the profile of innovators on campus

Many times when a student gathers enough courage to be a leader on their campus, they take that first exciting step by creating their own club of innovators. After making the colorful posters, inviting every friend they have on facebook, going out to buy snacks and setting up with the club's name in big letters on the blackboard, attendance is lower than hoped. So what happened? Why is it that once we discover something great that we want to bring to campus that it’s so hard to get people to commit to it? In this wiki, we will uncover the keys to creating an atmosphere on your campus in which current innovators are known and celebrated. This is important in order for their ideas to be heard and highlighted.

Look for Resources that are Already There

Most people try to start from scratch in bringing innovation to campus, when really there are many people on campus that are already acting as innovators! Use their drive and accomplishments as an example of what innovation is by showcasing their stories!

Rather than regular meetings, focus on larger, more unique events. After all, it's easier to have someone commit to one big event then repetitive gatherings. See if you can find an established group at school and co-host an event with them. The group will be glad that their club is getting more recognition and you will have a larger network of people that will learn about your event.

Make sure to reach out to various professors and faculty that seem like they would like to promote innovation on campus. These professors are likely to encourage their students to attend innovation events through word of mouth and extra credit. In addition, involving faculty will help guide a shift in curriculum to a more I&E centered discussion.

Who to Get Involved/Finding Innovators

There are certain groups and individual innovators who could provide great support and take your cause to the next level. Key contributors would be faculty, other students, established organizations, alumni, and guest speakers.

Faculty frequently recognize students whose ideas push boundaries inside and outside the classroom. Reach out to faculty and ask for help with identifying students who they already perceive as innovative. In doing this not only will faculty become an integral part of the process but they themselves can also show their innovative side and join you on the journey.

Other students are able to do a lot of face to face recruiting and create hype within the student body. From speaking to fellow classmates/faculty to spreading their views on social media other students can either make or break the rally/momentum you have behind your cause.

Established organizations work well in the sense that if they host an event people genuinely care about or are interested in then they can get a large turnout. With these large turnout possibilities the opportunity for reaching possible members for your movement increases.

Alumni have a great deal of influence within the community on your campus. This is so because when it comes to the student body they are able to persuade and inspire with their very own success stories. Having an alum that was once part of your innovation cohort or is an innovator in their own right will also provide great strides in recruiting more innovators. Alumni also have a special place within the hearts of faculty because they are the product of their teachings and endeavors. In that sense alumni will be able to help reach out to those faculty or administrators that may be stalwart or unwilling to help when you originally spoke to them yourself.

Guest speakers have the ability to draw in an audience that will recognize and possibly support your cause through their message and mere presence. They also have the great ability to rally new supporters behind your cause. With that they can also serve as figureheads for your cause which will greatly help with recruiting.

How to Generate Excitement for Innovation and Entrepreneurship: Branding

Generating excitement about innovation and entrepreneurship (I&E) can be a rather difficult task at most schools. There are two key approaches that have been shown to attract the most attention: rather exclusive events and/or creating a culture shift.

Exclusive Events:The first idea when trying to inspire more I&E around a campus is typically to start a club focusing on this subject. While this can work in some cases it is not always the most effective approach (although success stories of this may be seen for example at Michigan Tech). You will plan and plan and have great curriculum but because this is a once a week meeting, students will put off actually going and end up not participating. To combat this, approach the situation with exclusive events. Have a key group of people work together to plan events that celebrate I&E and then either make them open to your campus or focus on a select group. This stirs up more attention because then students with an interest in this topic are essentially forced to attend lest they miss a fantastic learning opportunity. An example of this sort of event is mentioned in Ways to Showcase Innovators on Campus detailing an awards ceremony that was created at William Jewell College to recognize those with an I&E mindset.

Creating A Culture Shift:Another approach to promoting I&E is to help create a cultural shift around your campus, with imagery and media (both online and offline) that celebrate the students and faculty whose creative work, research, entrepreneurial ventures, and innovative ideas are making a difference in the community and in the world. Many people don’t realize the awesome things that are going on on their campuses unless it is spelled out for them. One of the main things to keep in mind when started to raise this sort of awareness around your campus is developing a branding guide.This is especially important so that your efforts can be easily helped by university communications staff, admissions staff, and other stakeholders across campus who might want to help promote these students' stories.If all of your material (posters, flyers, emails, etc…) seen by those on your campus are made by the same standards (a unified color palette, one type of font, certain spacing every time, etc…) then it makes it more legitimized. A great example of this is the #thismatters campaign started at William Jewell College. This campaign focused on showcasing students and faculty who were/are doing just really awesome things on their campus (i.e. developing an app, improving fitness for children, etc…). From these stories a group of students developed banners, printed on vinyl, that were put up all around their campus so they just became an integrated part of the college life at William Jewell. Note the basic tagline at the top that says what the student is accomplishing, then smaller it goes into why this student is doing this, says who this person is, and then #thismatters. All of the posters at William Jewell were standardized to this layout, what changed, however, were the background colors and the stories. 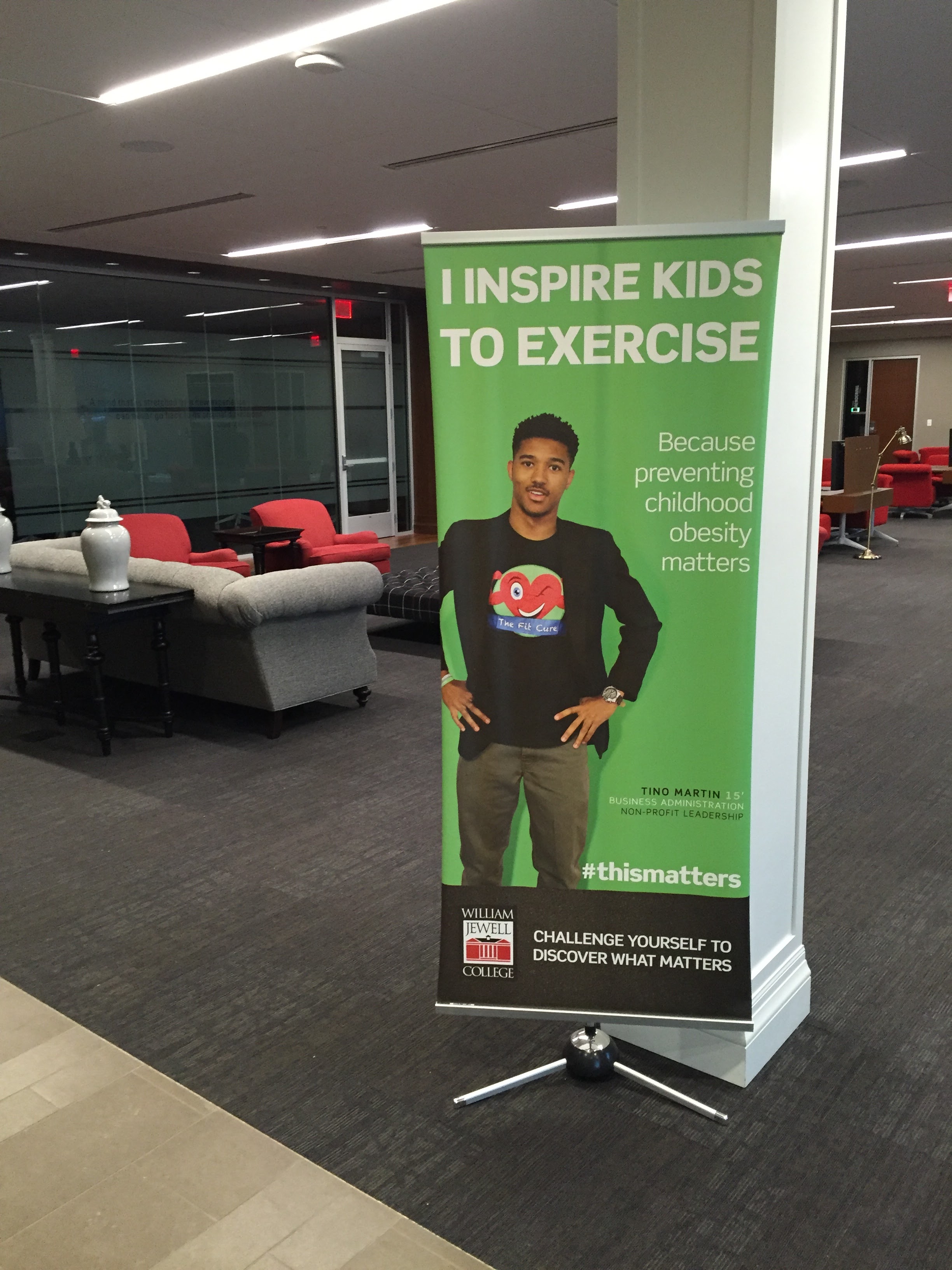 Ways to Showcase Innovators on Campus: